Housing NZ Corporation - caught out making it up again:

Upon arriving at the Human Rights Review Tribunal on 3rd August 2016 it was discovered that Crown solicitors Meredith Connell had sent Mr Mihaka and his Maori Agent a large amount of information the previous day, including Housing NZ Corporation's "Anti Social Behaviour Guidelines" management plan.

While attempting to read this new information at the same time as engaging with the Tribunal Mr Mihaka and his Maori Agent noticed that there were clear policies and procedures required which had not been followed.  In particular, it was noticed that Housing NZ Corporation was required to obtain a detailed statement from the person making the allegation, in this case, Mr Warren Frederick Dickie.

Police also have recently admitted to "an unconscious bias against Maori", and it is widely recognised that Maori are over represented in the justice system.

Mr Mihaka in particular has been let down by the justice system.  Judge Kelly had a duty to view the evidence and weigh it up and assess credibility of the parties accurately.  She failed to even notice the serious discrepancy between the Police Summary of 'Facts', Mr Dickie's statement to Police, and the evidence given on oath.

Housing NZ Corporation's Guidelines clearly state that staff are required to comply with the Privacy Act when collecting, storing or using information.  It is clear and indisputable that they have deliberately ignored and flouted these "Guidelines", as well as showing an utterly arrogant disregard for the law.

The Guidelines state that Housing NZ Corporation are required to take a detailed statement from the complainant - it is clear to anyone reading the Guidelines that this statement is required to be IN WRITING, and signed by the complainant - "write everything down in an incident summary form (T-463) or on a notepad if you do not have a form with you.": 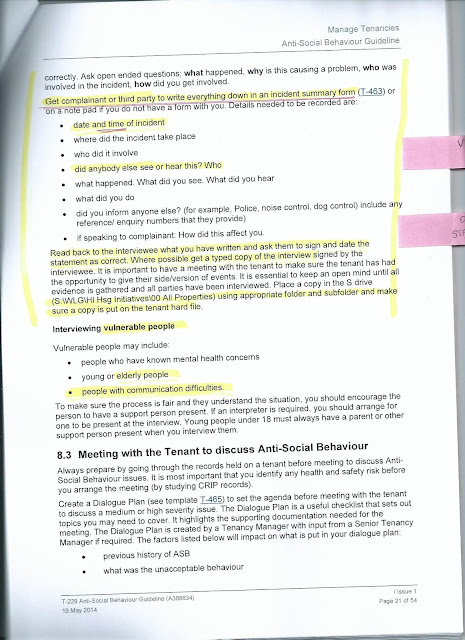 Reference to an interpreter seems to have been ignored - Mr Mihaka speaks Maori, it is his first language, it is also one of our official languages, however Housing NZ Corporation decided that an interpreter was not needed when dealing with Mr Mihaka, despite the obvious communication difficulties.

"Place a copy [of this statement] in the S drive . . .  using appropriate folder and subfolder and make sure a copy is put on the tenant hard file."

It was not until after 3pm that the Maori Agent noticed this requirement in the Guidelines and began to question Meredith Connell as to the whereabouts of this statement.

To their great discredit, after consulting with Kathie Furfie of Housing New Zealand Corporation, the Meredith Connell solicitors dishonestly tried to assert that such a statement HAD been taken, but not put to paper.  The irony of being accused of "artificiality" by the Tribunal is offensive given the blatant dishonesty and lack of good faith shown by Housing NZ Corporation and their tax payer funded Crown solicitors, Meredith Connell, - they are blatantly LYING - there was no statement recorded - Housing NZ Corporation never bothered to even take a statement from Mr Dickie prior to their decision to evict Mr Mihaka on the basis of common gossip and a pack of LIES cooked up by Mr Dickie!

Nothing whatsoever was written down - no statement was recorded.  Meredith Connell and HNZC continued trying to blatantly lie about this to the point where it is now clear that they are subsidised by the taxpayer and deliberately using those resources to discriminate against and bully tangata whenua and deliberately pervert the course of justice and continue to do so through every Crown colonial Court and Tribunal in the land, and those Courts and Tribunals simply carry on the charade - a big gravy train - a merry go round, shunting tangata whenua and M(atua) Mihaka through a series of flaming hoops, moving the goalposts, rearranging the deckchairs on the Titanic - while Sir Ron Young and others raise the alarm and plead for lawyers to blow the whistle before it's too late.  Sadly, they did that a few years ago, but only in terms of how it affected the income of lawyers, not the effect on their hapless victims clients, the decision upheld the claim, and can be found at this link- Criminal Bar Association v Attorney General.

Proceedings deteriorated markedly following this revelation and Meredith Connell's strenuous assertion that a statement WAS taken, just not written down, and the hearing did not end well, it being evident to everyone that Meredith Connell were LYING and that the required statement did not exist and never did.

Maori Agent Raue and Mr Matua Mihaka also questioned the statement of Ms Stephanie Smith to the District Court Tenancy Tribunal - which appear to be clear evidence of blatant perjury:

"Obviously there's a feeling over here that there's been something unjustified about that decision.  This is an opportunity to respond to that if you wish,  Are you aware of what's behind that?"

Ms [Stephanie] Smith [for HNZC]:
"I am, the 90 day notice was issued prior to us breaching the tenant for the alleged assault."

Then there's the letter from Te Ringa Mangu Mihaka's lawyer Nathan Bourke to Police and NZ Police's response - which categorically DENIES the claims Housing NZ Corporation made about information ALLEGEDLY received from Police!

This is nothing but an orchestrated litany of lies which has made its way through the District Court the High Court the Court of Appeal and the Supreme Court and justice has STILL not been done!

The so called New Zealand justice system is nothing but a sham - a sick joke!  A revenue gathering machine designed to fleece tangata whenua and the working classes while lining the pockets of shady bankers and financial speculators and other fellow liars in the old boys network!

Maori did not cede sovereignty and never agreed to be governed like this - FOR GOOD REASON!  This is NOT justice and will NOT be tolerated.

Posted by Transparency in New Zealand, Kiwileaks. at 4:09 PM

Email ThisBlogThis!Share to TwitterShare to FacebookShare to Pinterest
Labels: Police